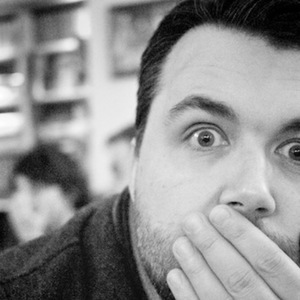 Keir has been working in the Shopify Partnerships team since 2012. Today he focuses on Partner Education and Community which involves everything from webinars and tutorials to meetups and events.

In addition to my work at Shopify, Keir co-hosts the irregular, and irreverant, Back to Front Show podcast with his good friend Kieran Masterton. After a year-long hiatus, they returned in January 2016 with the “difficult” 39th episode.

2011–2014 — For three years he worked on a number of projects with Elliot Jay Stocks under the banner of Viewport Industries. This included "Insites: The Book" — A 256 page book of interviews with 21 web and tech visionaries. All print copies sold out.

Additionally he ran numerous workshops, published Digest — a one off lifestyle large format magazine, and hosted Insites: The Tour — a four cities in four days tour chatting with interesting web folk about how they got started.

2011–2012 — he worked as freelance web developer, with a focus on HTML, CSS, JavaScript, PHP and WordPress.

2011–2012 — During this period he worked with the amazing team at Smashing Magazine on their Coding section. He helped curate and edit the articles that appear weekly and have been privileged to work with amazing writers at the forefront of the web industry.

2008–2010 — was spent working in a variety of roles at Carsonified (acquired in 2011), the UK based company known for web-focused events such as The Future of Web Design and The Future of Web Apps. Keir hosted and produced the podcast Think Vitamin Radio.. The show made the shortlist for the annual .net awards two years running.

Prior to moving to the West Country from London in 2008, he worked at a small web development agency with a focus on large scale data driven web applications as well as undertaking a variety of freelance projects. Pre 2004 he held a number of mostly web related positions in the NHS (National Health Service) in East London, UK.

Before the internet was even a thing Keir worked at the Royal Albert Hall in the box office. He has many funny tales from this era, feel free to quiz him!